The Duke women’s lacrosse team got all dressed up late last month for their annual Halloween costume party. The ladies in the junior class chose to dress up as The Little Rascals, but unfortunately it was done in poor taste when Taylor Virden painted her face black to portray Buckwheat.

All of this may have gone under the radar however, if it weren’t for the photo being posted on the university’s official athletic website, GoDuke.com. In a blog post written by another junior, Emma Tucci, the photo was shared with the world. Since then, the photo was changed to not include Virden, and was later removed all together.

Kirsten Kimel, head coach of the Duke women’s lacrosse team released a statement about the incident. “The Duke Women’s Lacrosse program celebrates Halloween with an annual gathering,” Kimel said. “This year, some of our costume choices were insensitive and entirely inappropriate. No offense was intended, but that does not matter because we should have realized how these choices would be viewed by those outside of our program. On behalf of our coaching staff and our student-athletes, we apologize to anyone we may have offended and understand while we believed we were making decisions in good fun, we should have been much more sensitive to the implications of our actions.”

The coaches and staff had no further comments on the situation. While the original photo from Tucci’s blog post has since been removed, it can be seen in the captured screenshot below. 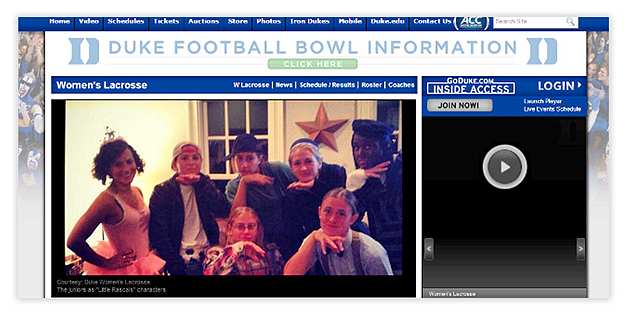