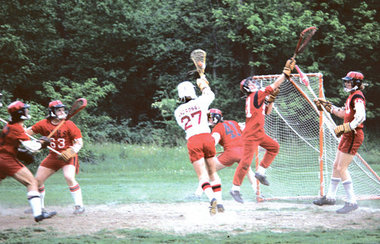 The New Jersey Lacrosse Hall of Fame will be inducting a former Rutgers star in its 2013 class. Richard Prakopcyk,  who attended Rutgers and excelled in Varsity lacrosse during the late 1970’s, will officially be inducted on Sunday, January 27th. The ceremony will take place at Mercer Oaks Country Club in Princeton Junction, N.J.

Prakopcyk began his lacrosse career at Hunterdon Central High School and then moved on to Rutgers University. He had quite a career at Rutgers, playing on the squad from 1975 – 1978. In his final year of play, Prakopcyk was captain of the team, and was awarded the Robert Collett Award. This award was given to the Rutgers lacrosse player who displays the best mental and physical spirit throughout the course of the season.

Since graduating from Rutgers, Prakopcyk has gone on to become a coach and mentor for youth lacrosse programs. He has coached the Youth Warriors out of Bethlehem, N.J. since 1999 and assisted North Hunterdon High School lacrosse teams with their offseason programs. He began assisting Hunterdon in 2003.

Congratulations to Richard Prakopcyk for this high honor!