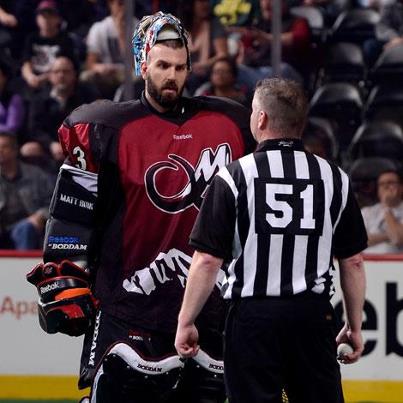 Last Saturday night, in an unusual series of events, Colorado Mammoth goalie Matt Roik was ejected from the game with 6:29 remaining after a glove check.

Minnesota Swarm coach Joe Sullivan called for the check when he noticed something unusual on Roik’s glove. The timing was convenient, with the Mammoth leading the contest by five goals.

The officials on the floor examined Roik’s glove, then discussed the situation with each other. After a bit of a delay, the officials issues a two minute penalty to Roik, along with a game misconduct.

Roik was definitely aggravated by the events which has transpired. The ruling from the officials cited NLL Rule 35, seen below, which discusses the prohibition of adding any bulk to a goalie’s equipment.

Padding may not be added to or on the outside of the glove unless prior approval by the league.

Of course the biggest question mark of the statement is where it mentions prior approval by the league. Roik received permission from the league for his modified glove, but that was back in 2010 as a member of the Washington Stealth. According to the NLL, Roik should have received additional approval prior to each season in order to use the glove without issue.

The league was on the hot seat after this ejection, especially due to the timing. According to a statement released by the NLL, ”it should be noted that by league Rule 88.4, the inspection should have taken place immediately following the conclusion of the quarter, and not during the quarter.” Because of this, Roik was wrongly ejected from the game.

Roik was additionally served a $250 fine for the incident, however, he has the right to appeal.

Share your thoughts with us about this ejection. Do you think Roik should have been booted from the game or is he right to continue to use his padded glove?