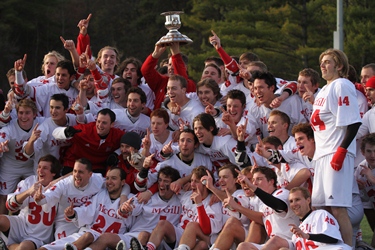 Jishan Sharples, a co-captain from Vancouver, scored the game winning goal for McGill with only twelve seconds remaining in double overtime. The goal, which came on a wraparound, gave McGill their first Baggataway Cup win.

While the 7-6 victory for McGill came in double overtime, there were some hot and cold moments for scoring during the game. After the first quarter, Western lead 2-1 on goals from Ryan McCrory. In the second quarter, Scott Watson scored to add to the Western lead, 3-1. McGill picked up a goal each from Ryan Besse and Leland De Langley to tie the game 3-3, but Western’s Kyle Childerhorse scored to give his squad the lead again 4-3 heading into the final quarter.

The fourth quarter opened strong for McGill, as they picked up three straight goals to take a 6-4 lead. Scott Watson would add a goal to bring Western within one, and Sam Neeb added the equalizer with only six seconds left to play, sending the game to overtime.

Overtime between McGill and Western was held scoreless. It wasn’t until close to the end of the second overtime that Jishan Sharple’s heroics would give McGill the Bagattaway Cup victory.

“It’s really difficult to put what this means into words,” said tournament MVP Brandon McLean, who helped send McGill to the gold medal game after scoring the winner with four seconds left in Saturday’s 9-8 semifinal victory over Guelph. “It was really a team effort. We worked so hard to get here and it’s paid off. I think it will take a while to sink in what we accomplished.”

McGill’s victory marks the sixth time, in as many seasons, that the Canadian University Field Lacrosse Association championship has gone to a different team.

Be the first to comment on "McGill University Wins CUFLA Championship"