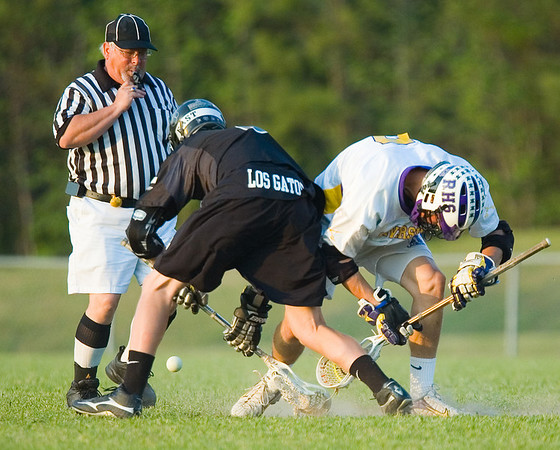 Last night, my U-13 West End Warriors went to battle with a team from across town known for their polished stick skills and outstanding conditioning. We were the underdogs from the first face-off, and fell to Robius 5-2.

Our kids played well in a game that could be described as sloppy and a bit out of control. I’ve never been one to bicker about referees. I’ve always supported the notion that nothing I do or say is going to alter the calls they make. But in a David versus Goliath kind of showdown, we never stood a chance, and much of this was due to the two men wearing black and white pin stripes.

Two of our opponents’ goals game while their attackmen were clearly in the crease. The first was on a fast break situation, and both officials couldn’t make it past the midfield line before their player took the shot. They were out of shape and out of position. The second came off of a set play, yet still, one referee trotted above the midfield line while the other stood firmly twenty yards away from the action. I was closer to the crease from my spot on the sideline and could blatantly see their player slide through the crease.

But the biggest call came in the third quarter when we were trailing by just one goal. Their player sprinted up the sideline and our defensemen gave him a body check from the side. One referee was literally three feet from the play and deemed it a legal play while the other threw a flag from the other side of the field. This led to a man-up goal situation for Robius and we could never regain momentum.

After the game, the director of officiating came up to me and apologized. He explained that there is a shortage of referees in our region and agreed that they missed a few calls. I constantly tell my kids to play with sportsmanship and integrity, but last night, nothing seemed to give. I can’t say that we would have won the game with better officials, but it would have certainly been more competitive. On to the next one!

Sean has played lacrosse since middle school and currently coaches a U-13 team. He lives in Richmond, VA where he teaches PE full-time and also attends Virginia Commonwealth University. He is a mass communications major with a passion for DC sports squads.

Be the first to comment on "Is a Shortage of Youth Referees Hurting the Game?"